Our 5:00 am alarm meant it was time to get up! I’ve obviously heard about the canal and other people’s interest, but never truly understood the magic of the engineering feat until I experienced it firsthand. Phone charged and sunscreen applied we headed to the deck where a palpable sense of camaraderie and excitement filled the ship. 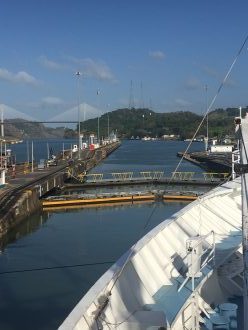 Coffee and breakfast were available on deck of our Windstar Cruise (more on that in a later blog!) as the captain skillfully navigated under the Bridge of America’s. On deck, it felt like everyone was holding their breath and simultaneously ducking because – as silly as it was – it appeared like the ship wouldn’t make it under, but of course we did. Barely. After narrowly escaping this giant game of limbo, the sound of applause filled the deck.
Taking a step back now that I’ve caught my breath to provide a bit of history of the Panama Canal in case you’re unfamiliar, as I was prior to this trip. The Panama Canal is a route that connects the Atlantic Ocean to the Pacific Ocean. The French began the project in 1880, but financial troubles led to the inevitable failure of this infrastructure initiative. After Panama’s independence in 1903, Panama negotiated with the United States for the construction of the canal which the US finished in 1914 and subsequently managed the waterway until 1999. 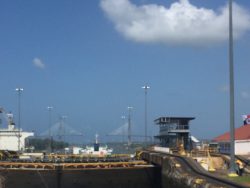 There are three lock stations, Miraflores, Pedro Miquel, and Gatun. The lock system lifts the ship up 85 feet to the main elevation of the Panama Canal and then back down again. Watching this process in person is truly remarkable.
As we entered the canal area, a crew entered our ship to help navigate us through the canal and the multiple locks. Initially ropes were thrown to a row boat and then attached to trains on both sides that “pulled” our ship through the locks. We didn’t feel the slow rise or fall of the water or that our ship was slowly moving through the lock. Many of us stood in awe watching the gates of lock open and close.
What an amazing day. Up early and just on deck all day observing, listening, watching, and learning.
So, after experiencing it first hand, I can now answer the question, “Why the Panama Canal?” It’s absolutely remarkable and will illustrate engineering feats that few other vacations can compare.